ONE MONTH
ONE ARTIST

I like the fact that you can get lost between the
folds and crevices where your gaze clings to the edges.
Whatever the support, the background, a back, a leg, I want the gaze to plunge
into these black cracks. When the earth opens under the effect of desiccation, doors ajar on
the inside, the intimacy of the sculpture, faults that reveal the underside of the modeling and
reveal the emptiness on which I build
Georges Jeanclos

Jeanclos was born in Paris into a Jewish family, his name was Georges Jeankelowitsch at that time.
When he was one year old, the family moved to Vichy; they cannot imagine the role that this city will play in the destiny of France in the coming years.

In June 1940, the military debacle broke out and Vichy became the capital of the French state, limited to what was then called the free zone. This fiction collapses in November 1942, when the German army occupies the entire territory. In January 1943 the militia was created, a French armed group in the service of the fascist ideal.

The Jeankelowitsch family first took refuge in a village; one day, in August 1943, the teacher came to warn them that the Germans were trying to arrest them. The family settles in a hut in the middle of the woods; the parents hide in it and never came out. For a year, the children had to go to the nearby villages, where the German soldiers were stationed, to get supplies.

In August 1944, the Germans fled, the Jeankelowitsch could come out of the woods. But the following days bring further traumatic experiences. "I saw the purges, the lynchings, the hatred, the collabos hanging by their feet from lampposts as we left the school." Shortly afterwards came the revelations about the extermination camps, the names Auschwitz and Treblinka took on their burden of horror and the family discovered with horror the magnitude of the disaster they had just experienced to escape: its members are the survivors of a decimated community.
The blows fell very close: among the victims were Georges' uncle and aunt, who lived in the nearby town of Saint-Amand-Montrond; they were arrested by the militia and massacred by members of the Gestapo. It was in connection with these events ("I lost my name in 1945") that, a few years later, the family abandoned its original name and adopted the French version "Jeanclos".

In 1947, at the age of fourteen, Jeanclos, who was then living in Vichy, chose with the full agreement of his parents to devote himself to artistic creation: he left school and began an apprenticeship with a sculptor, Robert Mermet, in the nearby town of Cusset. Jeanclos stayed with him until 1949, trying to do as well as the master, happy to see the red clay to submit to his will. Georges Jeanclos entered the Beaux-Arts of Paris in 1952 and graduated in 1958.

At the end of his studies, Jeanclos had to complete his military service: twenty-eight months! He will not be sent to Algeria because his brother died there as a soldier. During his service, he could even compete for the Prix de Rome; he won first prize and, in 1960, left for the Villa Medici, where he stayed until 1964.

During these same years he got married and became the father of three children. Back in France, he had to earn his living, which he did by making small terrines, sold in shops. In 1965, he became a professor at the Beaux-Arts of Le Mans, and in 1966 he began to teach at the Beaux-Arts of Paris.

In 1970, he decided to go back to school: he settled in the Marais (former Jewish quarter in Paris) and started his Hebrew studies again.

His first artworks to see the light of day are the dormeurs (sleepers) (1). The sleeper is modeled using a thin sheet of clay, and is then covered with a second sheet, a sheet of clay. All the sleepers have a head, a face, but it is always the same, devoid of any particular characteristic: they are without age or sex, can appear indifferently men or women, adults or children.

The second figure that will come to inhabit Jeanclos' work is the urne (urn) (2).
These works were created in reaction to the death of Jeanclos' father in 1976. For a year, the son went to the synagogue to recite Kaddish, the prayer in honor of the dead, which he felt the need for, without even understanding its exact meaning.
The figures enclosed in the urns, of which we can see part of the head, sometimes a hand, of which we can guess an elbow, a foot.

Since 1979, every year, he has undertaken great journeys that take him to all the countries of the world, to Latin America, Africa and Asia. It is Japan that will leave the strongest impact on him: it will give him a new figure, called by Jeanclos Kamakura (3), in reference to the capital of Japan in the Middle Ages.

Whereas the sleepers or the inhabitants of the urns, the Kamakuras were dream images of himself, of an isolated being standing on the edge of life or immersed in the contemplation of his inner garden, from now on he shows characters who touch each other, talk to each other, participate in a story.

From this moment in his evolution, Jeanclos will make the couple (4) one of his favorite motifs.
In previous years, he sometimes depicted several characters together, two sleepers under the same blanket, two bodies enclosed in the same urn, or even two Kamakuras covered with the same cloth. 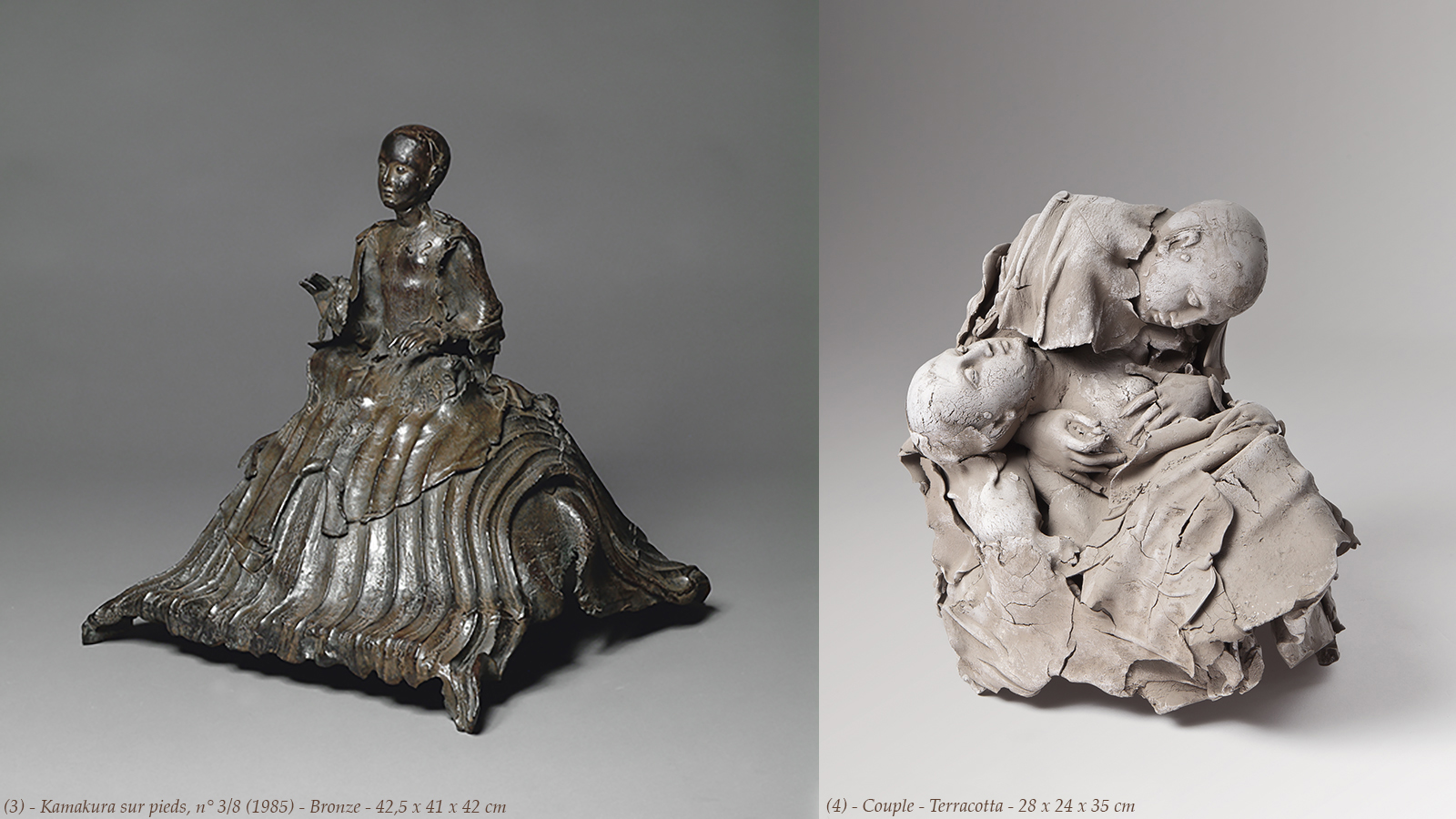 In 1985, Jeanclos lost his mother. This event is also reflected in his work, leading him to introduce a new element: the barques (boats) (5). Once again, it is an encounter between an inner experience and a form received from elsewhere: he thinks of the funeral boats found in Egyptian tombs.

Another event occurs at the same time in Jeanclos' life that will transform his work: his sculptures begin to be known. He was solicited by various public entities who commissioned him to create monumental artworks that were to remain in the open air.

The first major public commission was addressed to him in 1983: he was asked to sculpt a monument in homage to Jean Moulin, the leader of the Resistance. The second major commission, Jeanclos received it in 1985: he was asked to complete the tympanum of the portal of a 12th century Gothic church, Saint-Ayoul in Provins. He accepted with enthusiasm; this work will occupy him for five years.

In 1992, Jeanclos received the order for a commemorative monument, to be placed at the place called Guerry, near Bourges, where, fifty years earlier, his uncle and aunt had been thrown, along with dozens of other Jews, into deep wells where they died of suffocation.

The shattering monument will be completed in 1994 and consists of two columns. The first column holds the bodies that fall; the second contains those that rise to the surface.
Jeanclos was not satisfied with representing the crime, he wanted to represent a resurrection as well. These two columns are called The Fall and The Rise of the Bodies. It is these two movements that give meaning to this artwork.

In 1996, Jeanclos was diagnosed with throat cancer - which he was to die of the following year. While convalescing, he hurries to complete a new public commission, the portal of the Notre-Dame-de-la-Treille cathedral in Lille.
Biography realized with the help of passages from the text "La force de la fragilité" by Tzvetan Todorov

-1983-84: Monument to the Memory of Jean Moulin, Champs Elysées, Paris.
-1985: Door of the French Finance department, Bercy, Paris.
-1985: Tympanum of the portal of the church Saint-Ayoul, Provins.
-1989: Fountain of the Place Stalingrad, Paris.
-1992: Bas-relief of the college of Carrières-sur-Seine.
-1993: Decoration of the entrance portico of the departmental police hotel, Toulouse.
-1994: Monument commemorating the tragedy of the Puits de Guerry.
-1996: Fountain of Saint-Julien-le- Pauvre, square Viviani, Paris.
-1996: Portal of the Cathedral of Notre-Dame-de-la-Treille, Lille

GEORGES JEANCLOS TOLD US ABOUT HIS WORK

These parts are assembled in a technique that is similar to turning and modeling. The earthen plates stretched on the ground, like flexible bricks, are mounted one on top of the other and shaped until they evoke the soul of the sculpture. 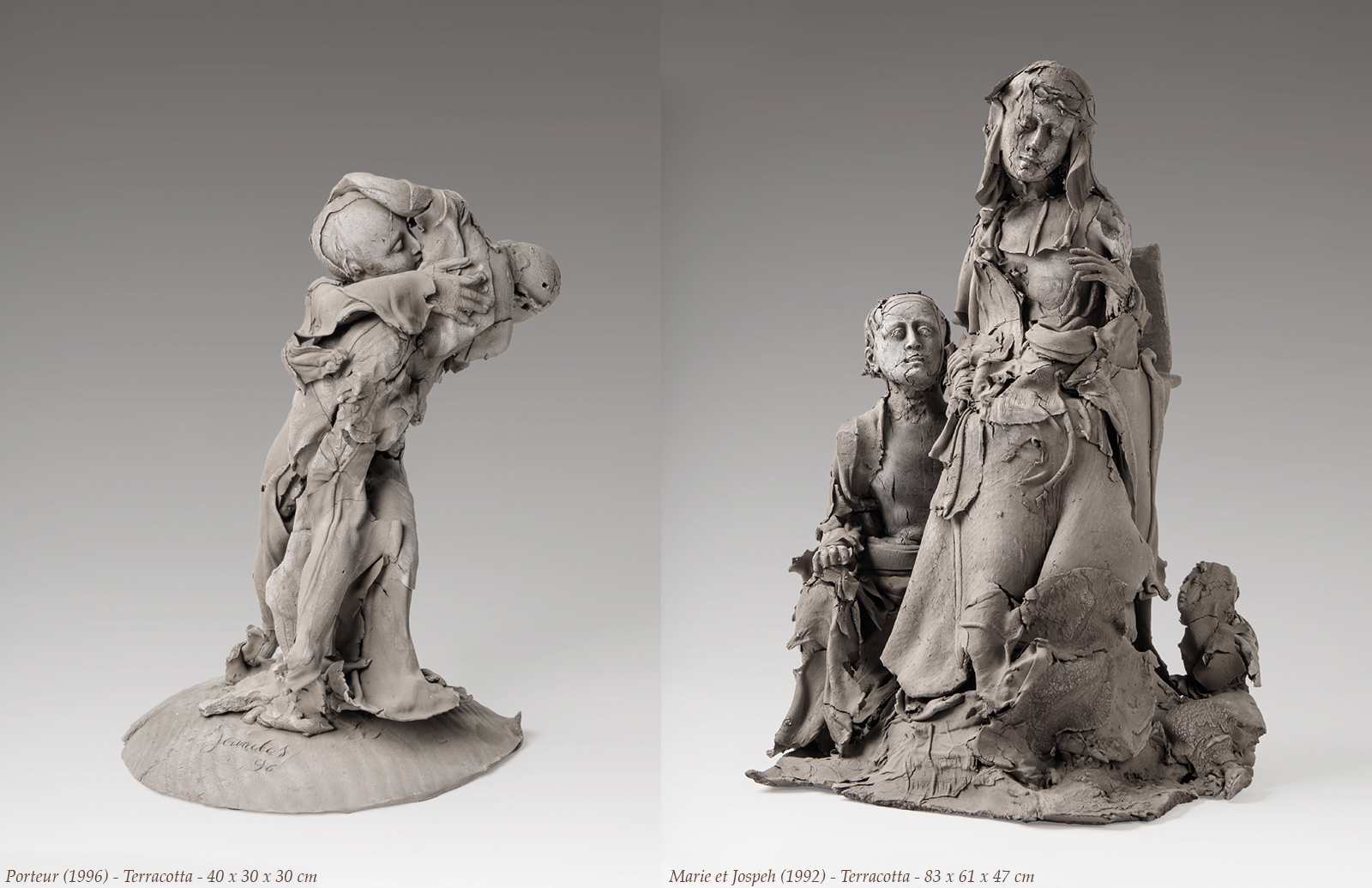 It is then that this gesture comes into play, where the movement of the arm becomes the most efficient tool of all: force, speed and distance, being an integral part of a technique where the range of all possible gestures is reflected in textures of infinite variety; the veil of earth becoming the visible part, the trace of a gesture that has had no contact with the object, revealing in transparency the underside of the sculpture; physical distance, the place of creation that Pollock had already experienced.

It is no longer the pierced bucket but the open palm, the arm and the torso which, in a rotational movement, raise this clay from the ground in a jet whose calculated violence punctuates the work begun under the pressure of the thumb against the white walls of the coin moulds, a technique coming from the Chinese caves and Tanagra.

I discovered the value of emptiness in contact with the East, in Japan. What was dizzy, hollow, became an integral part of the work, a subtle material in the same way as the full, a volume protruding from the bas-relief. The emptiness that separates and connects the masses, the shaping of the space around the bodies, the obligatory passage in the bas-relief, keeping at a distance the figures that we always tend to group together in the square or the rectangle. This notion of landscape in sculpture fascinates me in Ghiberti and Donatello.

If you wish to know more about this immense artist, we recommend three books, which you can find on our website by clicking here:

- Georges Jeanclos, Tzvetan Todorov. Book published in 2011 during the exhibition tribute at the gallery

- Georges Jeanclos - Murmures, Christian Noorbergen. Catalog of the exhibition in partnership with the Palais Jacques Coeur of Bourges in 2017

- Georges Jeanclos - Auguste Rodin: Modeler le vivant, Eike Schmidt. Catalogof the exhibition to be seen soon at the gallery in partnership with the Musée Rodin.

Discover the sculptor Georges Jeanclos through his works, his monumental realizations, his texts thanks to the film Georges Jeanclos - Sculpteur d'humanité from Equipage Media by clicking here

All the photographs have for credit : ©Galerie Capazza