TERRES CATALANES, fertile land of a quality art
Thanks to the trips I have been able to make in the last years to establish a network of "ceramic cities", I have been able to appreciate the level of recognition and esteem for Catalan ceramics, which sometimes differs from our local experiences.

In fact, as in many areas of social and cultural life, Catalonia stands out especially in the field of contemporary ceramics. This is the result of a singular dynamic based on a particular history that began in the first half of the 20th century with the Serra family, followed by the illustrious Josep Lhorrens Artigas (1892-1980) and then Antoni Cumella (1913-1985), authors who marked an entire generation of ceramists who began this path in the 1970s, during the end of the dictatorship and the establishment of democracy in Spain. We can affirm that they follow the guidelines created by their predecessors, but they go much further, going beyond the shape of the vase made on the wheel, smooth and glazed, looking for new artistic languages and new forms, results and technical experiments, always keeping an eye on what was being done in the rest of the world, but with their feet firmly planted in their land, showing their personal and artistic interpretation of the world around them.

This artistic explosion of Catalan ceramics, which arose in the last third of the 20th century, has produced splendid fruits that are perfectly represented in this exhibition through artists such as María Bofill, Madola, Jordi Marcet and Rosa Vila-Abadal, Jean-Paul Azaïs, Claudi Casanovas or Emili Biarnés, but also those who followed them closely such as Mia Llauder and Joan Serra. The exhibition also features some of the new generation of creators who have started their career in the 21st century, such as Caterina Roma and Marc Iturri.
Oriol Calvo Vergés , Director of the Museum of Càntir in Anrgentona and Council member of the Internation Academy of Ceramic (excerpt from the exhibition catalog)

The puddle lesson put me on the way to natural clay varnishes, but puddles can also seduce me by their beauty. Sometimes, they become a transitory living environment for insect larvae, unhoped-for drinking troughs for birds and small mammals, or cases for dead leaves turning into humus. Tiny lakes wrinkling at the slightest shudder... 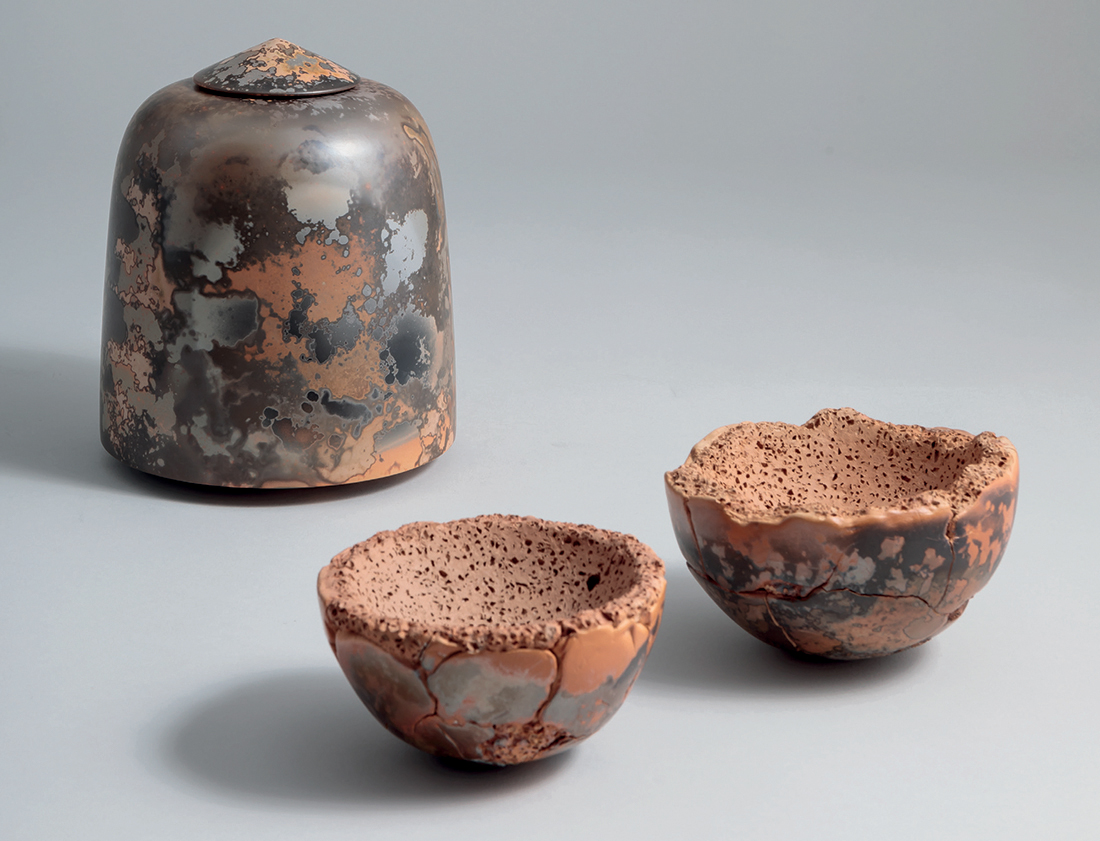 I am fascinated by the language of the earth, the ability of fire to define form and time. As obsessed by the idea of participating in the transformation by this magma, of leaving a temporary mark, intervene...
Being where the eye is located as an objective, the mind as a subjective screen. 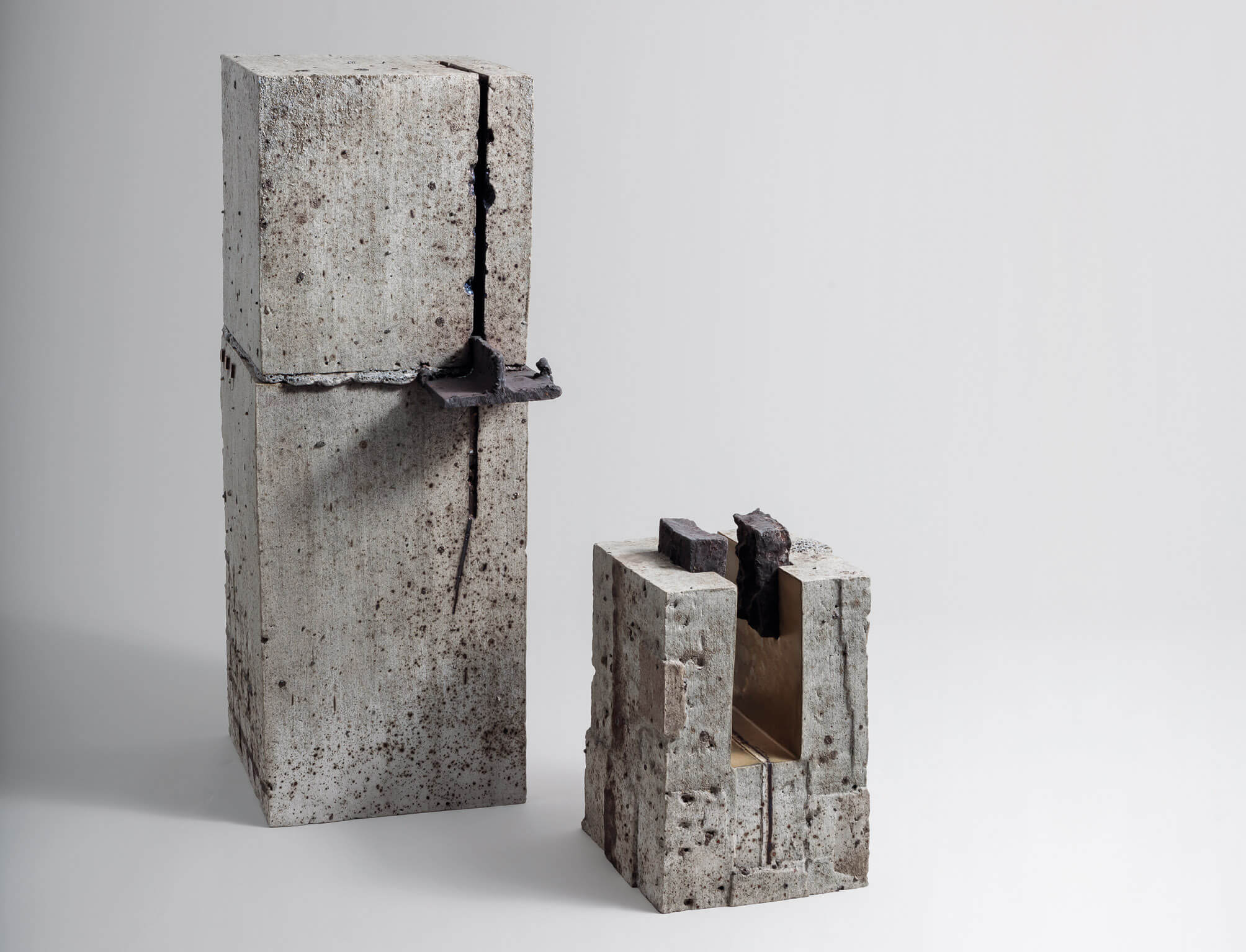 In my work, there is a creation of forms without specific function, it is a constant search between the desire of the classic and the contemporary. I do not seek perfection but on the contrary: I like natural and living things as if they were in movement. My works are like that and always over the years, have been and are a reflection of the imagery of the city and the landscape, I see them as small pieces of architecture that could be realized in a larger format or as small sculptures of clearly Mediterranean inspiration.

Empty, white, silent, fragile like all of us, like everything.
To each temple its hymn, silent.
Excerpt from a poem by Claudi Casanovas, Riudaura, June 2019

There is a place that, when one chooses it, when one decides to stay there, becomes unique.
It doesn't matter if it's a pleasant place or not. If it is an understandable or inexplicable territory.
Because it is the place.
Territory half-wild, half-humanized. Two faces of the same being. There is something, however, infinitesimal, imperceptible and intimate, that unites these two worlds and makes them inseparable and interdependent.
And it is in this fragile equilibrium that we can remain and establish our foundations. 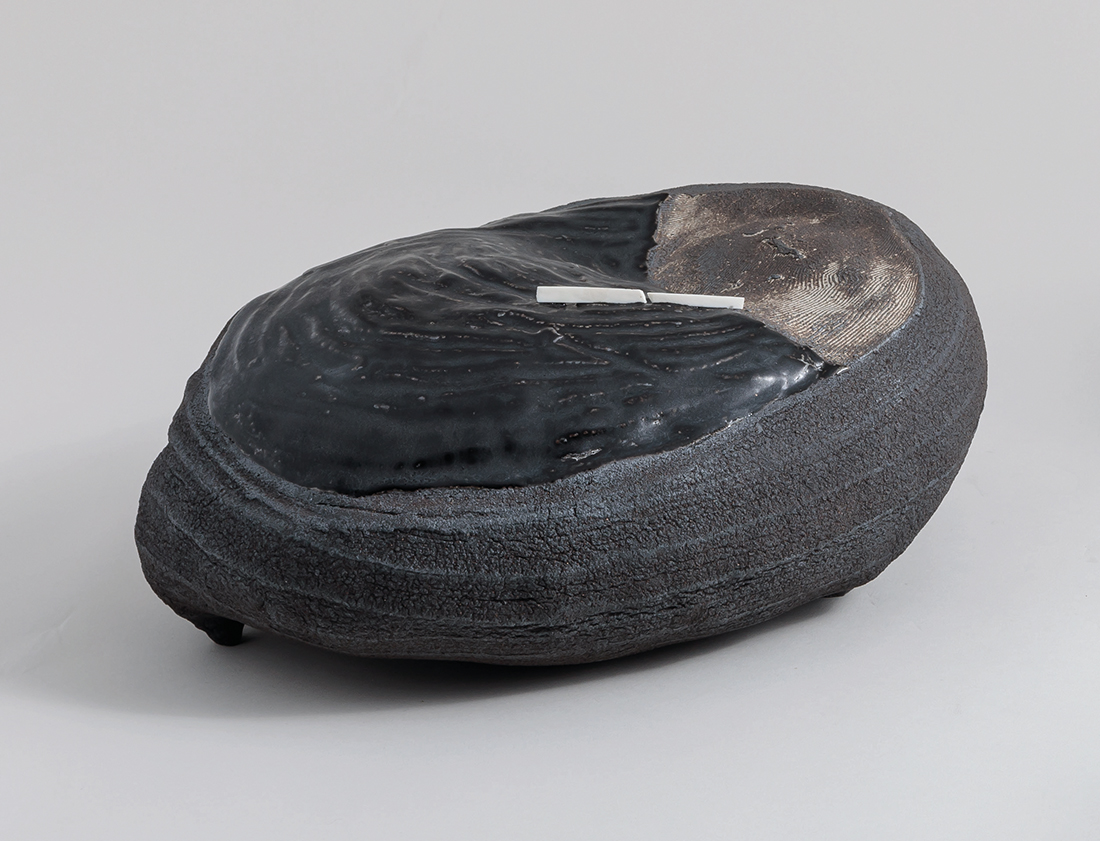 My research combines multiple techniques and disciplines with the aim of creating complicity with other materials such as fabric, plastic, metal, etc... The elements of earth recall the ancestral character of the craft while the new materials lead me towards other forms of work; a certain way of entering into my own universe, a personal microcosm where the communicative value of art encourages dialogue between the work and the spectator. 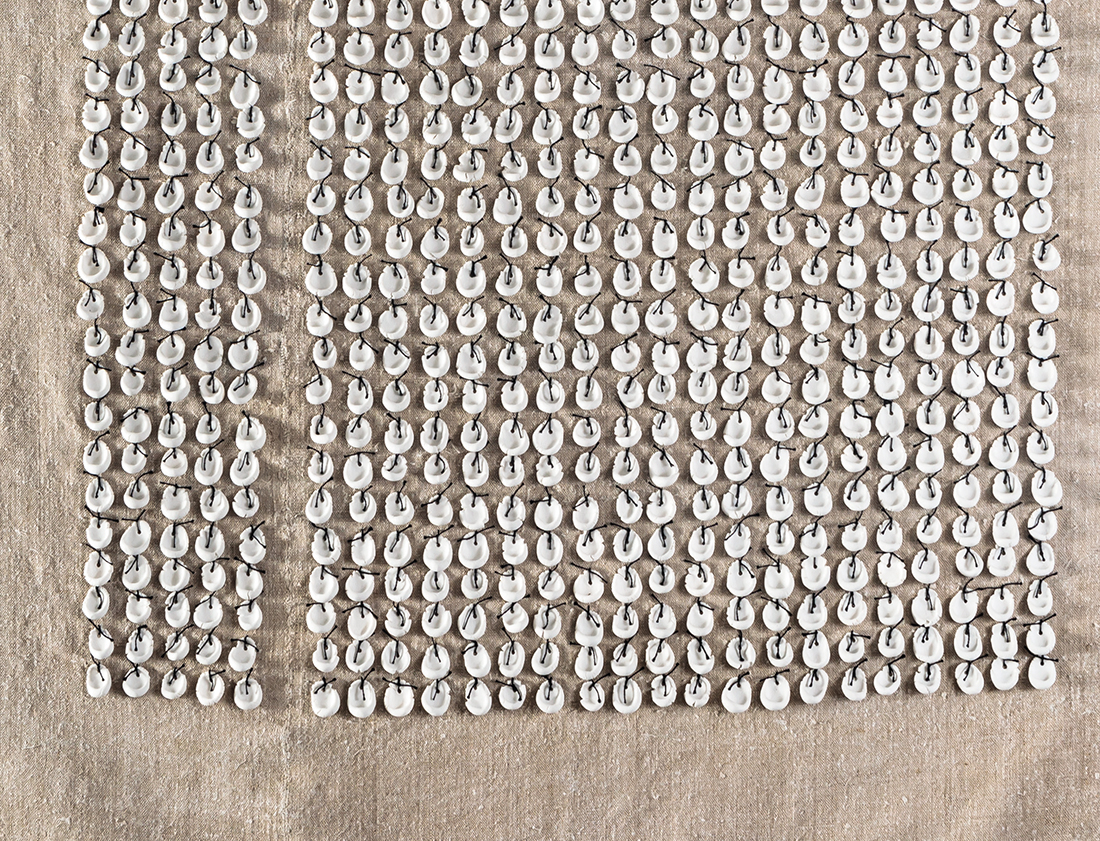 I found inspiration by living intensely in Catalonia, Barcelona and the Maresme, in the blue of the sea, the brown of the carob trees and the ochre of the earth. In my old neighborhood of Sarrià, its quiet streets, where a monk was walking around reading a prayer book. In historic Barcelona, old black stones and full of graffiti. In the workshop of my childhood with my family, in the Museum of Romanesque Art and also with Gaudí, Picasso, Miró, Tàpies, to drink from our culture open to the Mediterranean, but also from my travels meeting the contrasts in the East, the mystery in the Arab and African countries, the identification in old Europe, the geographical and architectural exuberance in America. Sometimes I work like a musician, in the form of variations. I make a few series of works that only differ from each other by a small movement that moves, piles or crushes the material on itself. 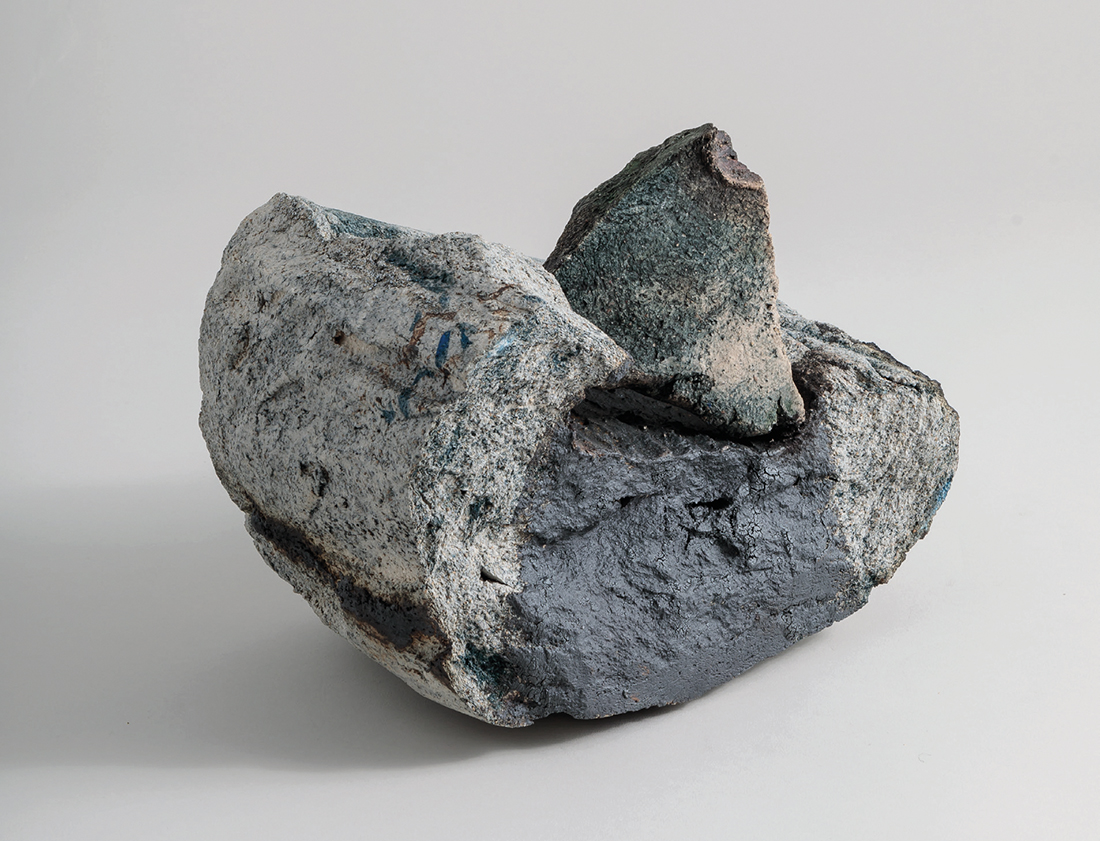 Being a self-taught ceramist by choice from a young age has given me a rare freedom to create through intuition and observation. I explore the possibilities and limits of materials and techniques without prejudice, through a mix of experience and instinct. Making my own clay, treating rocks and plants for enamelling, building my own wood oven in the forest for firing is a way for me to grasp the essential sensitivity of wild beauty. 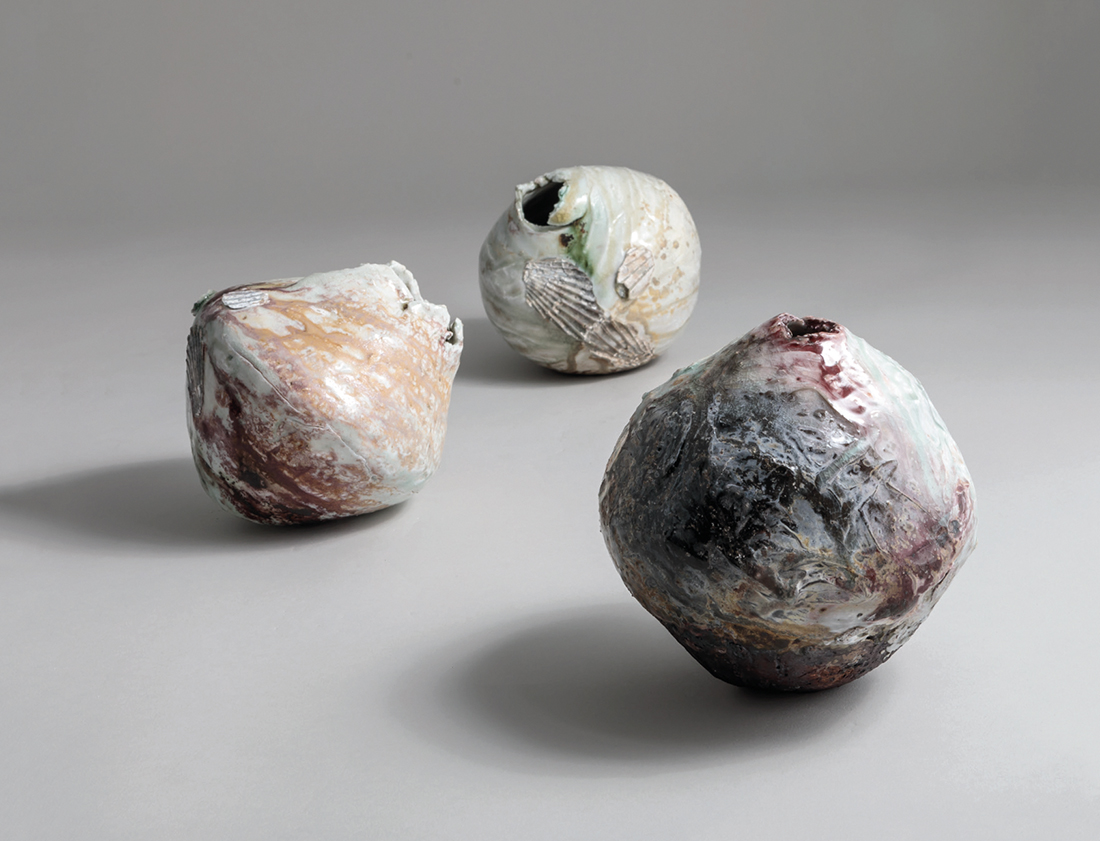 I do not model the pieces, my work consists in gathering the conditions allowing the appearance of the forms.
The initial structures are regular polyhedrons or their assemblies, flat figures with right angles and profiles, where all the formal alterations of the chaos of the process to come will be reflected. 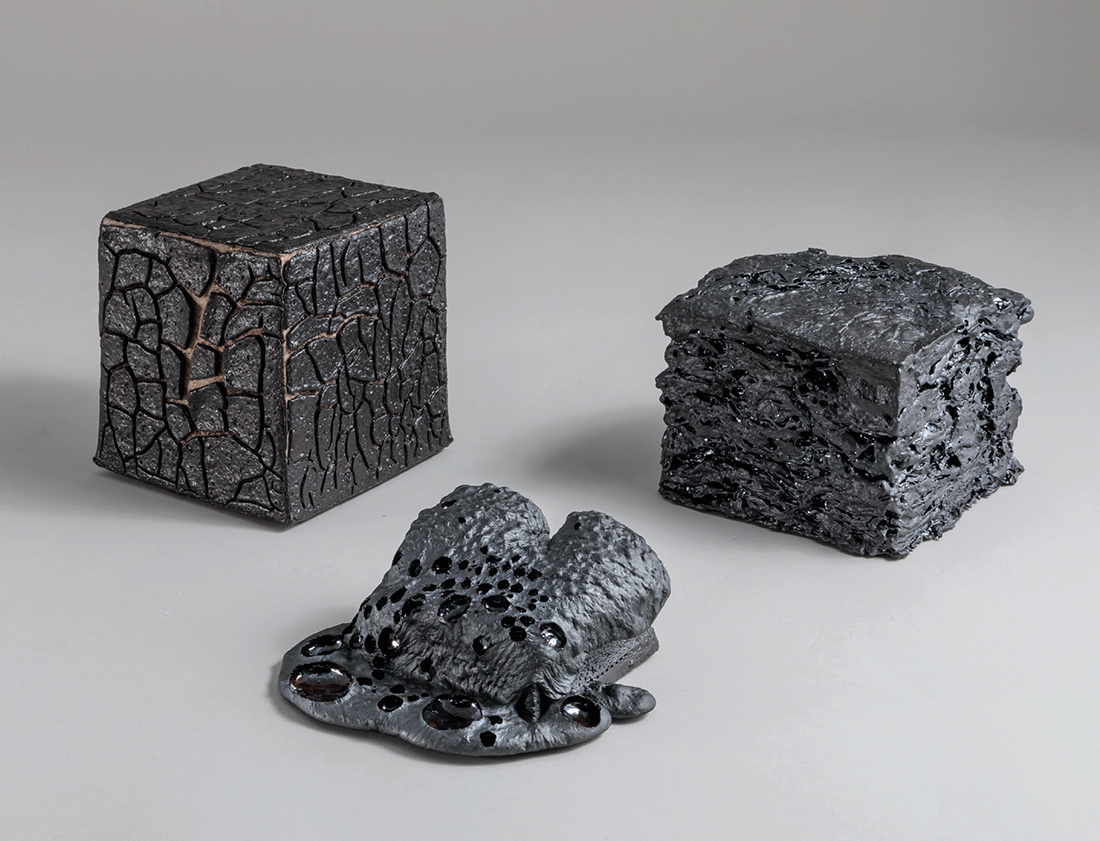 It is thanks to the presence of light that we perceive the existence of shapes, volumes, colors.
Thanks to the progression of color, made light, the artists Rosa Vila-Abadal and Jordi Marcet lead us on a path of forms, from elements to elements, earth and fire, air and water. They offer us the origin, the beginning, the discovery, the hope to reach the human, a latent future behind closed eyes. 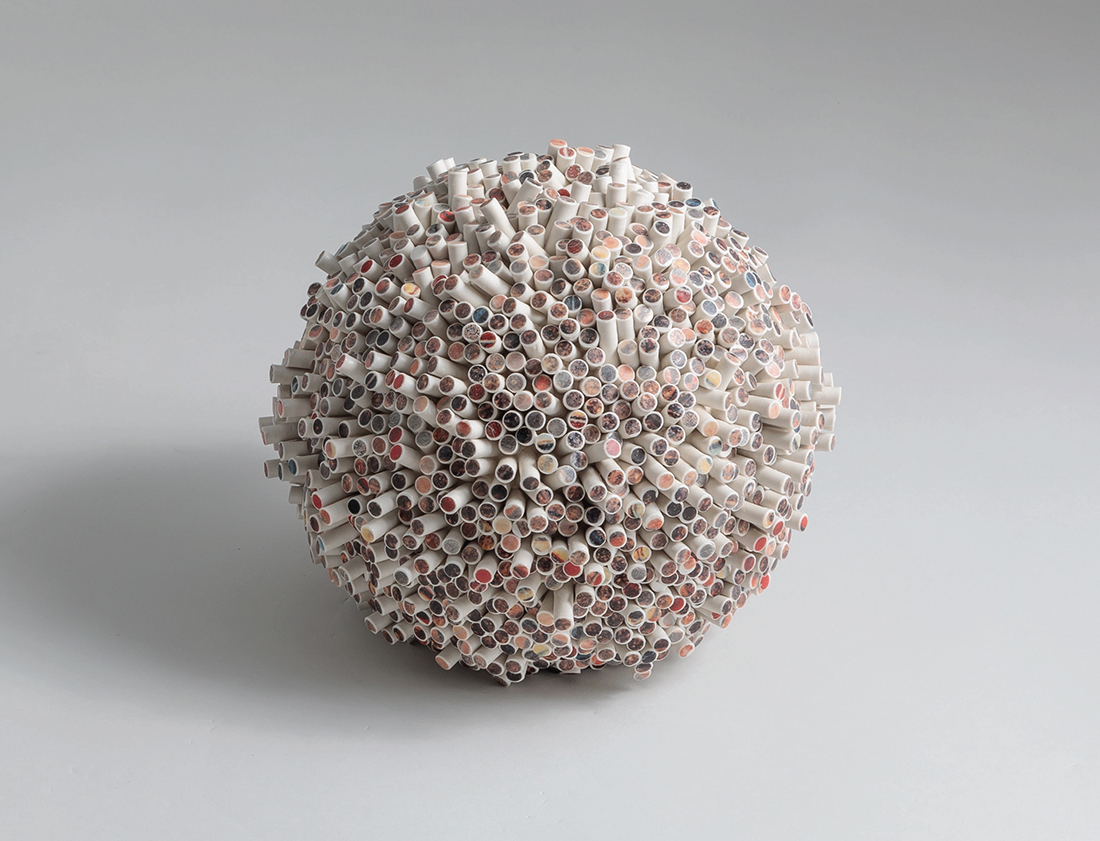